Microclimate in the terrarium 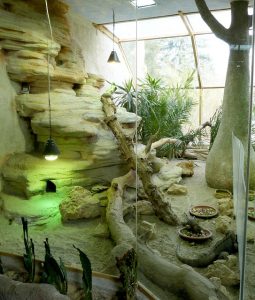 Humidity in the terrarium is an important climatic factor. No animal can exist without water. Many animals need a source of water to replenish their body’s water reserves, some drink drip water that condenses on plants and terrarium walls, and many amphibians are content with moisture absorbed from the air. The level of humidity that needs to be maintained in a terrarium depends on the natural habitats of the animals that you keep. Desert animals require low humidity, 5-10%, animals of arid habitats about 30-50%, and animals of tropical forests 80-100%. It is most convenient to measure the humidity in the terrarium using a hygrometer. These devices can be purchased at pet stores.

Several techniques are used to maintain humidity in the terrarium. The main one is the device of a reservoir or a drinking bowl, the liquid from which gradually evaporates and a constant humidity level is maintained. In addition, the pet can use these tanks for drinking. For animals in need of high humidity, this is not enough, so the keeper needs to spray the terrarium regularly. Conventional spray guns used in floriculture are well suited for spraying. In large terrariums, reptile foggers & humidifiers can be installed. Such devices turn on at regular intervals and spray water for several seconds. Some of them work absolutely silently, which makes it convenient to operate them at night. A good help for maintaining humidity is hygroscopic soil, which collects moisture, and then gradually evaporates it, helping to keep the desired microclimate in the terrarium for a long time. To retain moisture, you can reduce the size of the ventilation holes (in no case should they be completely sealed!). 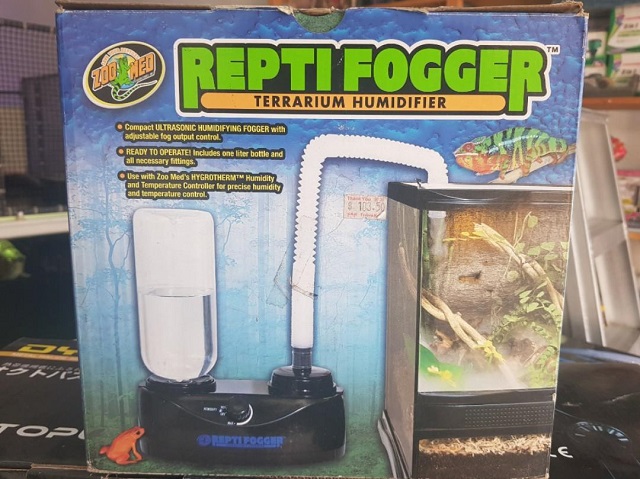 To reduce humidity, for example in a desert terrarium, you should increase the size of the ventilation holes, you can install a fan that will ventilate the terrarium. Such a terrarium can be sprayed very rarely, 2-3 times a week. Some species, such as skink geckos (Teratoscincus scincus), do not require a permanent drinker at all.

Ventilation is one of the most important aspects in maintaining the microclimate of the terrarium. Often novice keepers try to use an ordinary fish aquarium for keeping animals. Unfortunately, such a house often turns out to be a death trap for pets. Even if you install a wire cover in the aquarium, ventilation is still insufficient and the air begins to stagnate. Gases released by animals, primarily CO2, accumulate in the lower part of such a dwelling. Many animals in such terrariums get respiratory diseases. Insufficient ventilation leads to a rapid increase in the number of fungi and microorganisms that negatively affect animals. As a result, a pet can die from any banal infection, which under normal conditions would not lead to death. The most unpleasant thing is that the harmful effect of poor ventilation does not become noticeable immediately, but manifests itself gradually: the animal begins to weaken, lose weight, and then dies. 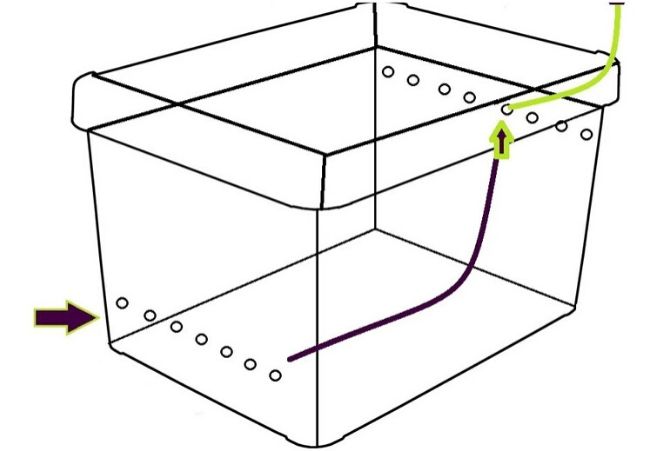 Most terrariums use ventilation based on thermal convection. In the lower part of the walls there are holes through which cold air enters the terrarium. There it heats up and, rising, exits through the holes in the lid. In small terrariums, 2-3 holes for ventilation are enough. Their size is chosen depending on what kind of microclimate you need to create. With strong ventilation, the air dries quickly, which is good for animals living in the desert. In terrariums with a tropical microclimate, high humidity is maintained by reducing the size of the ventilation holes: they can be partially sealed or special valves can be used. In such terrariums, it is recommended to place the lower ventilation grate under the front glass so that cold air prevents the formation of condensation and the glass does not fog up. 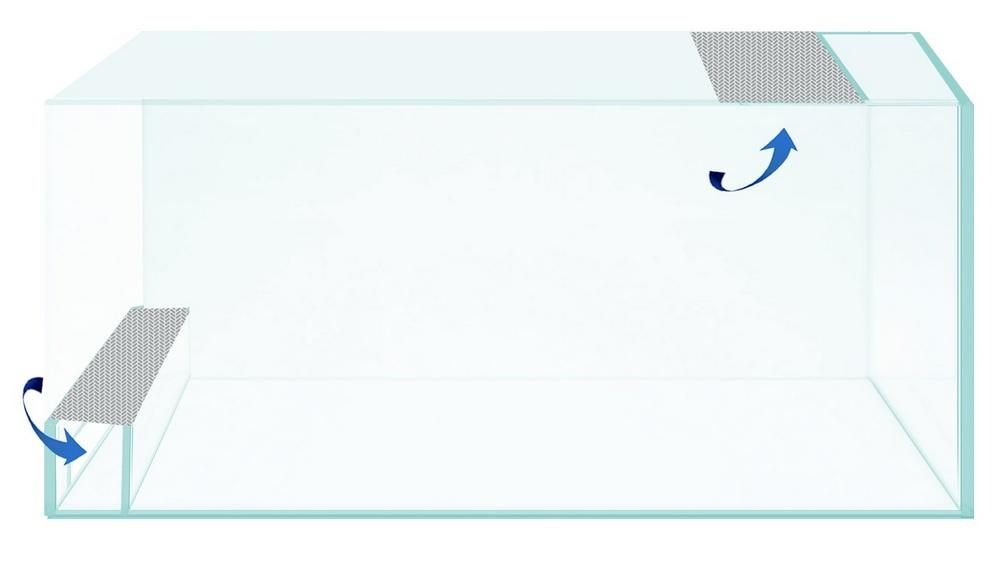 For large terrariums with a volume of more than 1 cubic meter, convection ventilation may not be enough. In such terrariums, it is necessary to install a fan that forcibly pumps air out of the tank. 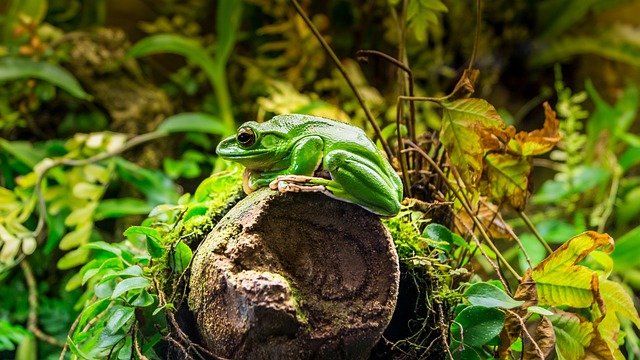 Lighting is one of the most important elements of creating optimal conditions for the life of animals. For many animals, it is no less important than temperature. The phases of animal activity depend on the light mode. If desired, with the help of artificial lighting, you can change the day-night cycle for nocturnal animals to be able to observe their activity during the daytime. At the same time, do not forget that the length of daylight in different parts of the globe is different, and if you are going to not only keep, but also breed some animal, in order to stimulate reproductive behavior, it may be necessary to gradually change the ratio of light and dark time in a terrarium.

For lighting, incandescent lamps can be used, which at the same time perform the function of heating. However, the light from such lamps is usually insufficient, and in large quantities they will lead to an undesirable increase in temperature. It is good to use fluorescent lamps for lighting. They give a strong uniform light, practically without changing the temperature in the terrarium. In addition, such lamps are safe for animals who want to sit on them. This is especially true when keeping geckos and tree frogs. For most types of terrarium animals, a small amount of ultraviolet radiation is necessary. Ultraviolet light affects the metabolism and production of vitamin D, which is necessary for pets. Ultraviolet radiation is present in the sun’s rays, but since the glass does not pass ultraviolet, natural radiation usually does not enter the terrarium. This is good, because in large quantities, ultraviolet light can be harmful to pets. Interestingly, for many amphibian species, ultraviolet radiation turns out to be harmful, so before installing a source of such radiation in a terrarium, it is necessary to study in detail the conditions of a particular species. As a source of ultraviolet light, special fluorescent lamps are used, which, in addition to visible light, also emit ultraviolet. The characteristics of such lamps indicate the amount of ultraviolet radiation emitted. Such a lamp should be selected depending on the needs of the animal: for reptiles of the middle band, lamps that give about 2% of UV light are usually suitable, and for desert reptiles — 8%. The recommended distance of the lamp from the animal is no more than 30 centimeters, since the radiation is weak enough. Depending on their needs, animals themselves can regulate the amount of ultraviolet light consumed by approaching the lamp and moving away from it. 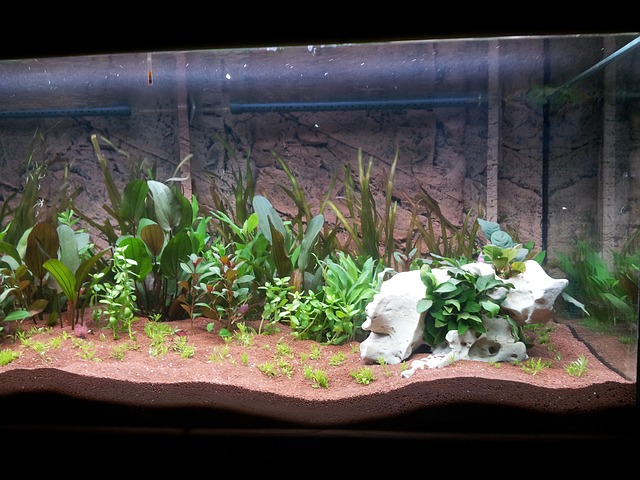 Reptiles and amphibians, unlike birds and mammals, do not have a constant body temperature. Therefore, they depend very much on the temperature of their habitat. For normal life terrarium animals need a temperature regime corresponding to their biological needs. When animals overheat, they suffer from heat and dehydration, and at lower temperatures their digestion and growth are disrupted, the animals become sluggish and apathetic.

For local heating of areas of the terrarium, such as stone, branches or soil, it is convenient to use conventional incandescent lamps, which are also used for lighting the terrarium. Many animals that live in nature in open spaces are happy to bask in such sunny spots. Infrared lamps are well suited for heating the air in a terrarium. They emit very little visible light and do not interfere with sleeping animals at night. Usually such lamps come in power from 50 to 250 watts. Powerful lamps must be switched on via a temperature relay. In addition, powerful lamps should be isolated from animals, especially if they are climbing animals, such as frogs or tree lizards. From contact with the hot surface of the lamp, the animal can get severe burns.

For many animals, air heating is not a sufficient condition for temperature comfort. Many snakes, turtles, lizards and other animals need bottom heating, i.e. ground heating. It is optimal to create a temperature gradient, that is, several warm and several cold ground areas. The temperature in warm areas should be in the range of 30-45 °C, depending on the type of animal. Cold areas can have temperatures from 18 °C. Aquarium heaters of low power (10-20 watts) can be used to heat the soil. Such a heater is lined with large stones, and the top is covered with soil so that animals could not dig it out. Special thermal cords are convenient to use, they consume less energy, are safe and durable enough. The cord can be placed both in the terrarium and outside by attaching it to the bottom of the terrarium with adhesive tape. Placement outside is safer, since animals will not dig out such a cord, and feeding insects will not damage its insulation. Unfortunately, if the terrarium does not have legs, then you can place the cord outside only by making special grooves in the shelf on which the terrarium is installed. To safely place the cord in the terrarium, the following method is used: the cord is attached to the bottom and covered with a centimeter layer of dry, clean sand. A sheet or several sheets of glass are placed on top, the edges of which are treated with a skin and fit more or less tightly to each other and to the walls of the terrarium. 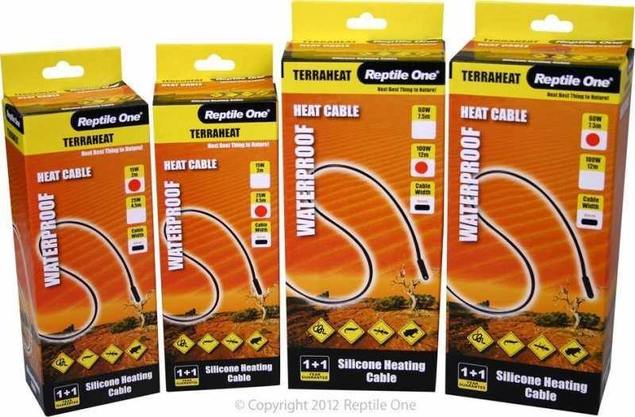 In large terrariums, heating mats with a capacity of 60 to 500 watts can be used for heating. Such mats cannot be used without a thermostat, since they are adapted for heating large rooms. 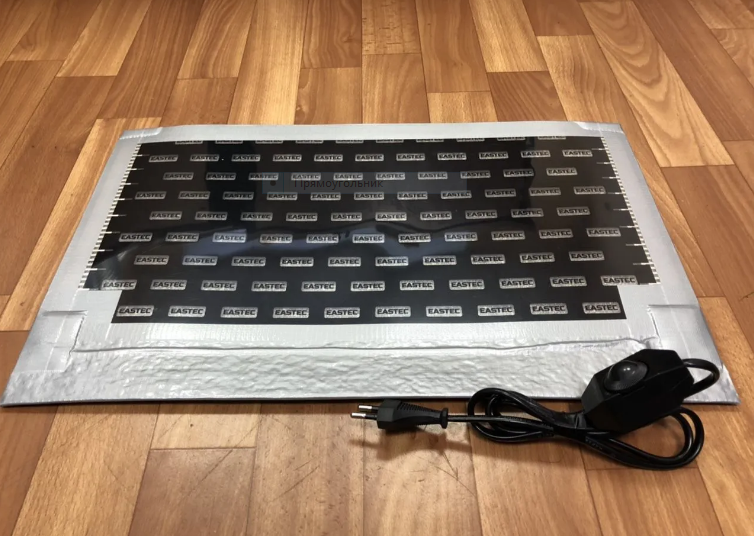 For local heating, you can use special warming stones or caves, which are made of ceramics. These devices are waterproof, some are even equipped with thermoregulators. 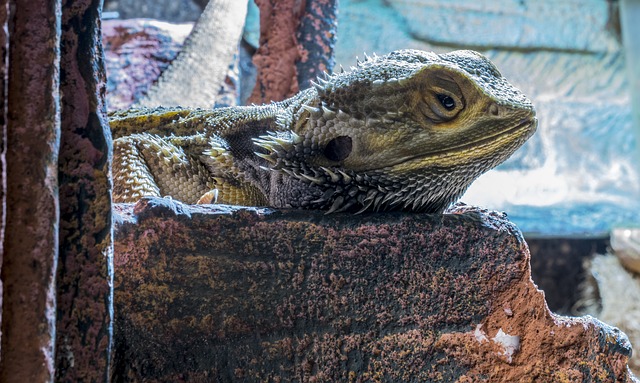